​Hypatia in G.B.Shaw's Misalliance ​at The Shakespeare Theatre Of New Jersey 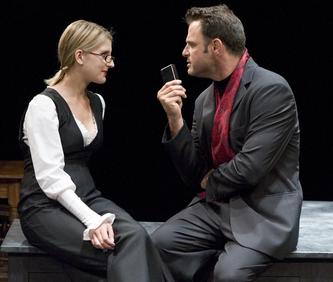 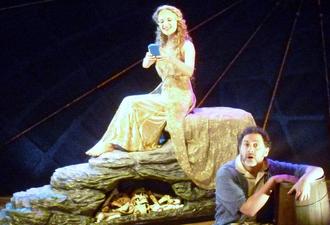 Bianca in Taming of The Shrew at STNJ 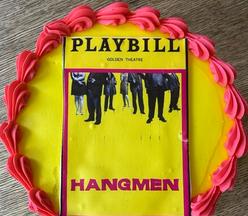 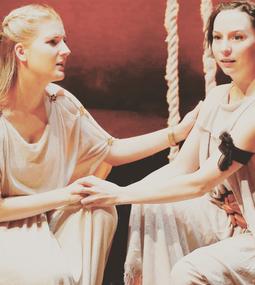 ... cast member who really seems in their element is Katie Fabel. Fabel is delightful in her supporting role as a dimwitted but lovable romantic interest. 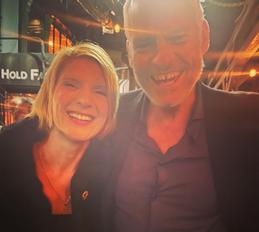 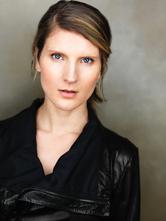 ​"Katie Fabel, in particular, is so funny..." VARIETY 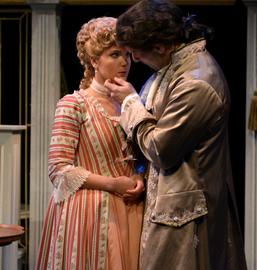 One Man Two Guvnors at The Pioneer 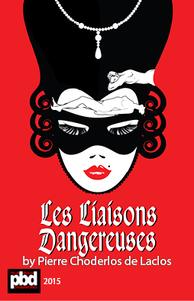 I don't recall having been as enamored as much before with the minor but important characters many of whom are the real comical backbone of the plot...Katie Fabel uses a slightly flakey façade to indicate Bianca's modest gentility. CurtainUp

* Katie Fabel gives a playful, seductive performance as Hypatia, one of Shaw's most intriguing heroines, in "Misalliance." ... as the duplicitous-and-proud-of-it Hypatia, Fabel injects the show with a sharp, modern edge. Playing all the men around her like fiddles — and, more importantly, insisting upon her right to do so — Hypatia is one of Shaw's more provocative heroines. With a sharp sparkle in her eyes and a mischievous pout in her expression, Fabel is proof that Shaw's work can still feel relevant and fresh. NJ.com 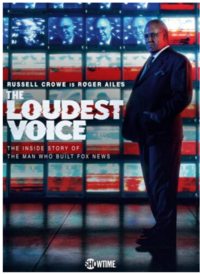 Cecily in The Importance Of Being Earnest at The Shakespeare Theatre, DC

Brooke in Noises Off at Shakespeare Theatre of New Jersey 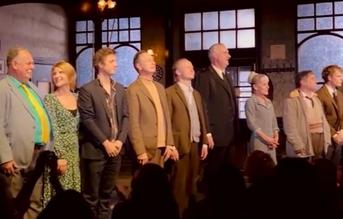 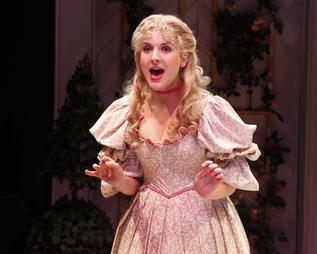 Katie Fabel, who plays Antigone's sister Ismene, is an unqualified success. Her entire manner, from her posture to her voice to even the drop of her hair, is that of a young woman torn between extremes: striving to maintain her blood-innate regality while longing to do the right thing by her deities and her lineage alike. When Fabel's Ismene pleads before Creon to assume some of Antigone's responsibility to keep them on equal footing, the show finds tension and genuine emotion ... Fabel bridges the gap between personal conviction and outside expectation, and lets us see the agonized heartbreak we can incur when an imbalance forms between them. It's a sumptuous scene linking to Antigone at its best... 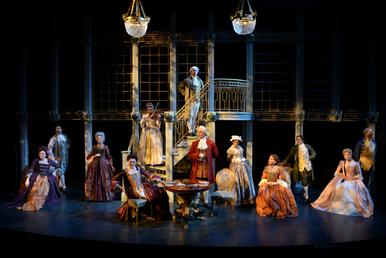 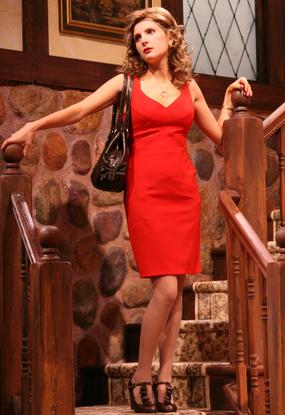 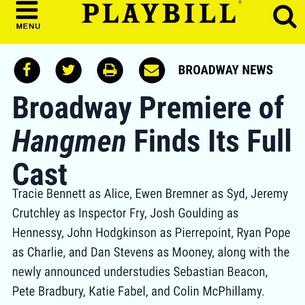 The Loudest Voice on Showtime - Episode 7 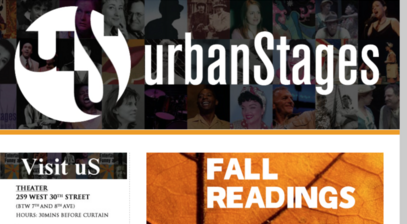 ...adapted from Sophocles by the great Irish poet Seamus Heaney, is lovely to hear, even as it tells a vicious tale... setting in motion the tragedy and raising the ideas that keep the play enduringly vital — of what is good versus what is legal, of our obligation to ourselves versus our duty to society. NYTIMES 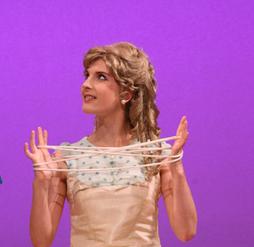 What’s Britain’s second-most famous executioner to do now that hanging has been abolished? The answer comes with a lot more than he bargained for.Olivier and Academy Award®-winning writer Martin McDonagh (Three Billboards Outside Ebbing, Missouri; The Pillowman) is back with HANGMEN, his 7th brilliant and wickedly funny new play. After two sold-out engagements in London and sensational success off-Broadway at Atlantic Theater Company, HANGMEN has arrived on Broadway with a cast including Mark Addy (“Game of Thrones”), Tracie Bennett (End of the Rainbow), Ewen Bremner (Trainspotting), and Dan Stevens (“Legion,” “Downton Abbey”). 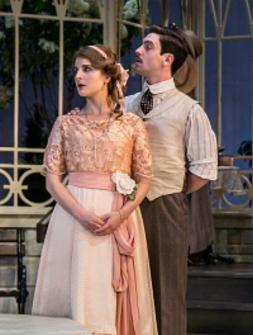 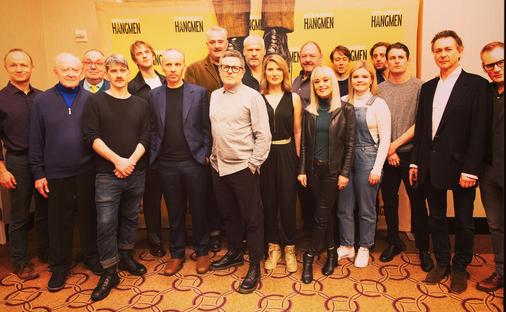 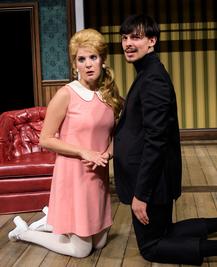 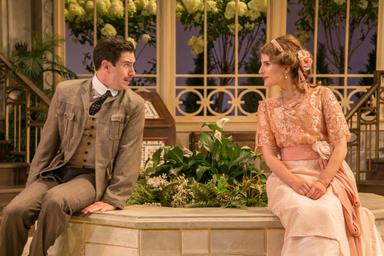 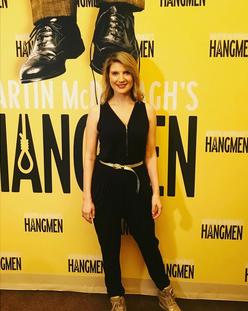 "​If there were such a thing, Katie Fabel would surely win a Tony for the best facial expressions, keenly nuanced and organic to each situation."  THE EXAMINER

The casting is impeccable, ... Cecily – simple, smart and approachable – is brought to life with nuance and verve by Fabel - DC THEATRE SCENE 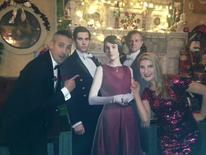 * If there were such a thing, Katie Fabel would surely win a Tony for the best facial expressions, keenly nuanced and organic to each situation. EXAMINER

* In the role of the chaste young matron, La Presidente de Tourvel, Katie Fabel was exceptionally lovely. Tourvel is a difficult character because she must appear both delicate and beautiful but have a very strong will and sense of morality. While her character is eventually broken by Valmont's seduction, she can't appear weak or too easily won. Fabel did a splendid job with her portrayal. EdgeMediaNetwork 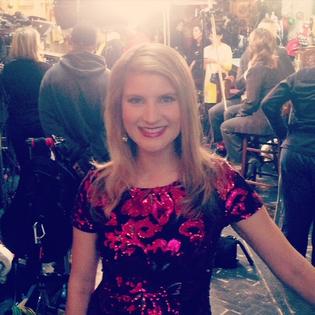 Cecily in Ernest in Love at Irish repertory theatre 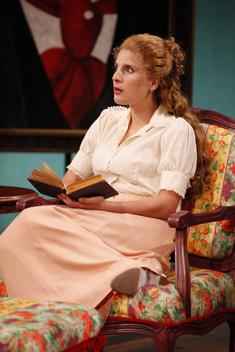 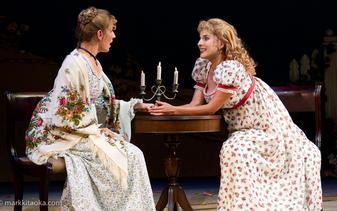 The Siren in Sirens at Penguin Rep - directed by Joe Brancato

the acting is superb.  Jennifer Le Blanc (Elinor) and Katie Fabel (Marianne) are the perfect foils for each other, balancing the sense of societal duty with the impulsive emotions of what the heart desires... portrayed with an authenticity that drew me in. It wasn’t long before the torments and joy of both sisters were also mine. StarkInsider 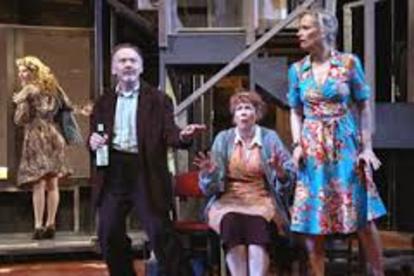 Based on the best-selling book "The Loudest Voice" by Gabriel Sherman, TV executive and media consultant Roger Ailes' life continues to be a source of interest to many due the lasting effect he has had on the media world. Primarily focusing on the past decade when Ailes arguably became the Republican Party's de facto leader, and defining events in Ailes' life, including experiences with world leaders that helped launch Ailes' political career and the sexual harassment accusations and settlements that brought his Fox News reign to an end.
Networks: Fox News, SHOWTIME
Writers: Gabriel Sherman, Tom McCarthy, Alex Metcalf, John Harrington Bland, Laura Eason, Jennifer Stahl
Nominations: Golden Globe Award for Best Miniseries or Television Film, WGA Award best writing, Critics Choice best Mini-Series.
Awards: Golden Globe Award for Best Performance by an Actor in a Mini-Series or Motion Picture Made for Television

The beautiful blond siren (Katie Fabel), dressed all in gold... plays a travel agent, a waitress and a mystery woman onboard the ship but is most adorable as the technologically naïve siren.  NYTIMES

Hangmen by Martin McDonagh on Broadway - closed during previews March 11th 2020 - due to Covid.

Brooke Ashton, who flits about in her undies and keeps losing her contact lens, is keenly defined by bombshell Katie Fabel. VARIETY

As Grete, she commands both Jonathan and each of her two interview scenes with a calculated slyness and imposingly accurate Teutonic accent.

Smashingly turned by Katie Fabel as Cecily …The innocent-looking Ms. Fabel has the best such moment, finding all the comedy in “A Wicked Man,” in which she confesses a yearning for something naughty. NYTimes